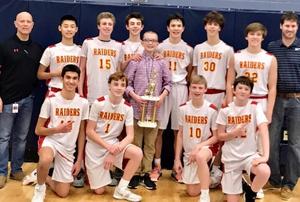 After being down by 12 in the tournament semifinal game, HP came back to beat Prosper Rogers for the fourth time this year to move to the championship game. After being down once again by 12 points to McKinney Evans, the Raiders pulled ahead with less than two minutes left and held on for the victory.

MVP for the District Tournament was manager John DeVaul for his support and inspiration for the team. Gold finished the season at 13-0.
Print